Leaving no one behind: the scattered rural area of Honduras has been put on the map

The motto of the Sustainable Development Goals is "leaving no one behind". For water and sanitation this implies that all people – including those families who live in the last house on top of the mountain - must have access to water and sanitation services. Water For People and IRC in Honduras have tried to put those families on the map to make sure that they are not left behind.

If you would search on Google Maps for the community 'Rivera de las Minas' located in the Municipality of 'El Negrito' you would not find it. This is understandable. It is not more than three groups of houses. Each group on a different mountain. The 27 families in the community have access to only a few public services. There is a place that serves as a school for the 18 schoolgoing children and recently solar panels were installed to light the houses. As Mr. Hipólito Ramos said "in the 50 years that I live here, they have never come from the municipality or another organisation to worry about a community as far away as ours".

The situation of Rivera de las Minas is not unique. It is estimated that in Honudras there are some 23,000 communities classified as "scattered rural settlements" - with less than 200 inhabitants. Some of these are isolated farms, others are groups of 3-4 houses, and others have a nucleus of some nearby houses, but always with less than 200 inhabitants.

What this type of community has in common is its limited access to water and sanitation services. With Mr. Enoc Inestroza, vice-president of the community of 'Nueva Esperanza' (located in the municipality of 'San Antonio de Cortés') we walk for about 20 minutes uphill until we reach some rocks below where there is a spring, protected by a bit of clay to ensure that that the water is protected and with a hole in it to fit in a tube to transport the water to the house of Mr. Enoc. In the absence of something fancier, this is how a large part of the population in these dispersed rural areas are supplied with water. These tube systems typically supply one or more houses. Obviously, these systems represent an unimproved service. Water sources like these aren't protected and carry the risk of contamination. When we were present the horse of Mr. Enoc's was also drinking water from the spring. Tube systems also tend to require a lot of maintenance and can get blocked with mud.

The situation of Mr. Enoc is common. In the study we did, we found that 30% of the population in dispersed rural communities is supplied by these tube systems. The data revealed a coverage with improved services in the dispersed rural area well below the national average of 91%, and even of the average of the rural area that goes in 84%.

There are two main reasons for this situation. The first is that these communities are not on the physical map, nor on the mental map of local authorities. The former mayor of San Antonio de Cortés, Mr. Amner Mendoza mentioned: "only until recently I learned of the existence of these dispersed rural communities and their water and sanitation situation." 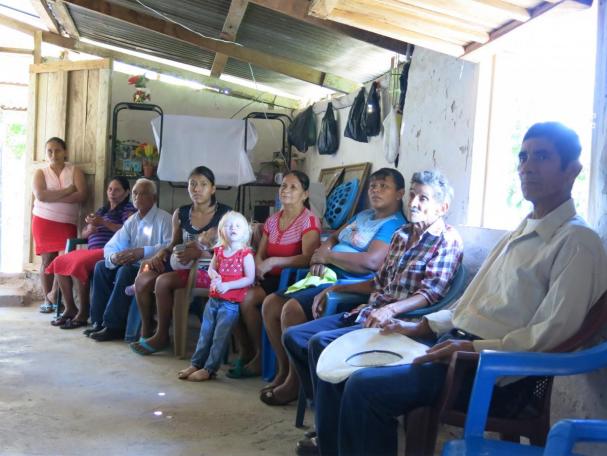 The second reason is that providing services in these communities is not easy. The small scale, the long distance between the houses, the complicated topography (many of these communities are on a hillside) and their distance from other populated centres makes installing water facilities difficult and therefore costly. Which is why larger communities without access to water received priority in water and sanitation programmes, instead of those in rural areas.

"We have a vision of total coverage, and now that we know the dispersed rural area, it also means we can start to serve this area" (Delvin Salgado, Mayor of El Negrito)

Together with the NGO Water For People, we studied the feasibility of the models to provide water services to this segment of the population. The first step in this process has been to put the communities on everyone's map. Through mapping and diagnosis, we have obtained more information about the number of communities and the population in rural areas, as well as the size of the problem. We estimate that around 380,000 people in the dispersed rural areas lack improved water and sanitation services.

In the three municipalities where the project intervenes (El Negrito, San Antonio de Cortés and Chinda), an inventory has been made of the scattered communities and their situation in water. Through this process, dispersed communities are now on the radar of the municipalities. And this makes them start looking for solutions to the situation. As the mayor of El Negrito, Delvin Salgado, said: "we have a vision of total coverage, and now that we know the dispersed rural area, it also means serving this area."

The project is now in the process of piloting different types of solutions in communities such as Rivera de las Minas and Nueva Esperanza. And there are many questions to answer. But the main step is taken: to put the rural dispersed areas on the map of the authorities. This is the first thing to ensure that no one is left behind.