Why we should care about how we display our data.

As the Millennium Development Goals (MDG) era came to an end, under-five mortality rates were declining in most areas of the world. With the implementation of the Sustainable Development Goals (SDGs), and the more ambitious targets and how the goals were defined, some countries became off target once again.

These are probably not words that come to your mind when first seeing the images below. Red is typically associated with negativity, decline, or to warn us of imminent danger. In the maps below the authors of a child mortality study, chose these particular colours to catch the reader's eye and warn about child mortality rates. At first glance, one might conclude that rates of child death have increased greatly in central Africa. I certainly assumed that.

However, if you take a closer look, the numbers in the key change drastically. The red in the lower image is actually the same as orange in the top image. So, these countries had actually progressed, far less children died in 2015 than in 2010.

Alternatively, in the maps below, we can see the results of a study mapping under-five mortality trends from a different perspective and looking only at African countries. Even from 2010 to 2015 you can see the large decreases in rates, and this illustrates the progress that has been made. The authors of the study pointed out that with the implementation of the SDGs, new goals will be more difficult for some countries to reach. In order for some countries to meet the target for under 5 mortality rates, the decision makers need to prioritize interventions such as improving maternal health care. 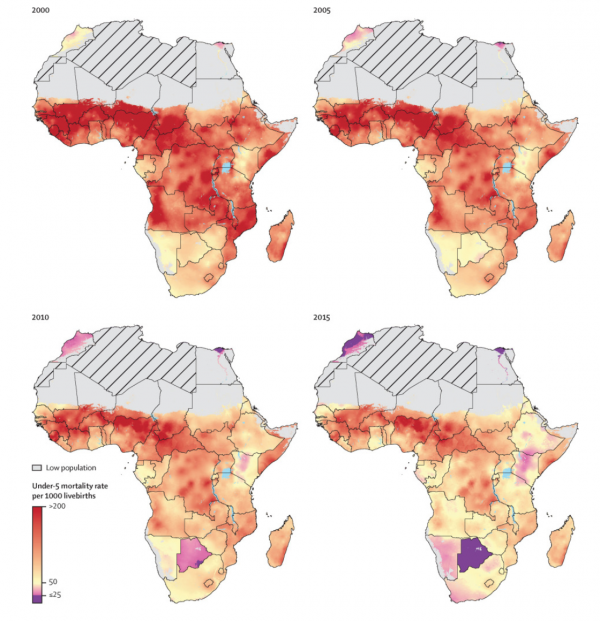 A third graphical representation, in the bar chart below, also from the UN child mortality report, shows more accurately the progress that has been made on a global scale, but this graphical representation doesn't scream 'we need to do something now!'. The graph illustrates the drop in infant mortality from 1990 to 2016. Looking at the data in this way, makes you believe most countries are on track to hit the 2030 goal. 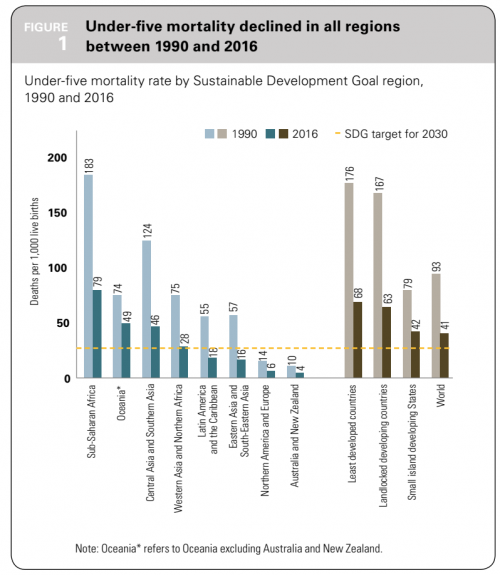 And the answer is...

While it is very important to inspire awareness and change with shocking data, it does countries a disservice if we don't acknowledge how far they have come in a relatively short amount of time. This is especially important when we consider population growth.

It's important to have ambitious goals for improvement. However, benchmarks of progress might be a more effective way to evaluate progress than a looming goal too far for some countries to reach. If we are able to break the lower benchmarks, then we can reach the higher ones too.