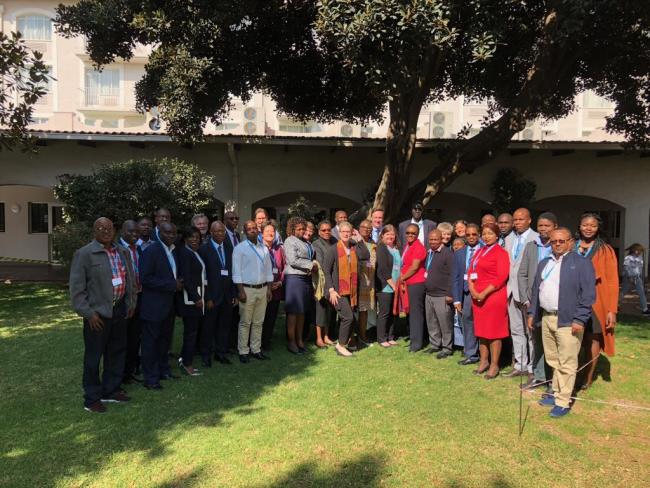 2018 marks the 10th anniversary of the GLAAS Report, otherwise known as the Global Analysis and Assessment of Sanitation and Drinking-Water, which is a UN-Water initiative implemented by the World Health Organization (WHO). The 2018/2019 cycle has a special focus on national policies, plans and targets, alongside governance, monitoring, human resources and finance. IRC has been supporting WHO implement GLAAS over a number of years, most recently in Johannesburg, South Africa, where IRC hosted a two-day workshop for GLAAS Focal Points from Anglophone African countries at the beginning of August 2018.

The workshop has grown to include not only multiple ministry representatives but also additional partners from the Water Supply and Sanitation Collaborative Council (WSSCC), Sanitation and Water for All (SWA) and the African Ministers’ Council on Water (AMCOW), who are also supporting focal points in their respective countries. Over 30 participants attended from 19 countries, assisted by support from IRC Associate Alana Potter, independent consultant Robyn Tompkins and the WHO GLAAS team, with Fiona Gore, Betsy Engebretson and Cathy Jung in attendance. For them this marked the second of three similar workshops in quick succession, the first providing training for GLAAS Focal Points from the Middle East organized by the WHO Regional Centre for Environmental Health Action in Jordan and a third planned for Francophone African States in September, hosted by long-time IRC collaborating partner, Aguaconsult.

To those that were there, we would like to extend our thanks and appreciation for the time, energy and enthusiasm that everyone brought to the workshop and reinforce our hope that the contacts and collaboration that emerged from it can continue into the future.

Focus on policies, plans and targets

The 2018/19 GLAAS cycle is a watershed for a number of reasons, not least for marking the 5th iteration of the report, and incorporates several updated sections that add important detail to the status of WASH service provision in respondent countries which will be of interest to anyone working in WASH policy and planning. If you think you know GLAAS from previous cycles, we recommend you take a look to appreciate how much has changed.

A third point to note is the growth in participating countries overall, to over 100 since 2008 and with it a chance for renewed global focus on SDG6, where WHO is the formal custodian of five of the eleven indicators, including SDG6.1, SDG6.2 and SDG6.3.1. The five indicators also include SDG6.a and 6.b on the means of implementation where GLAAS and OECD are co-custodians in close collaboration with UN Environment.  It is hoped that the focus on policy, plans and targets will act as a catalyst for action at national, regional and international levels. Creating sector impact was a key theme of the workshop, with Focal Points encouraged to see the exercise as an opportunity to inform and influence key decision makers in their sectors via the data collection and publication exercise.

GLAAS data collection is now ongoing to the end of 2018, with the GLAAS 2019 report scheduled for publication in the middle of 2019, followed closely by the development of regional and country highlights. Country highlights from the 2016/17 cycle have been developed and more will become available throughout 2018. The country highlights are a tool to assess the situation and progress made in countries and can be used for country-level decision-making. For those who want to know more about GLAAS or get in contact with a member of the team, please contact glaas@who.int. The latest GLAAS reports are available on the WHO website.

IRC’s latest thinking on systems change, titled "Understanding the WASH system and its building blocks", is a must read for anyone interested in making the most of any progress they are persuing in the WASH sector.