Learning and adaptation is about preparedness to innovate and to use the insights and lessons generated to drive change across the WASH system at all levels and in all operating contexts.

The concept of learning and adaptation refers to inclusive opportunities and platforms to regularly share information and data for critical analysis and generation of insights by stakeholders. From this learning – which can be formal or informal, structured or unstructured – the stakeholders then adapt by adjusting their policies and practices, picking lessons about how things worked and determining collectively what they can do better or differently.

In short, learning and adaptation is about preparedness to innovate and to use the insights and lessons generated to drive change across the WASH system at all levels and in all operating contexts. There are numerous platforms and instruments at various levels for coordination, sharing of information, and promoting transparency in decision making across the sector.

At the national level, several platforms provide learning space. These include: the Sector Wide Approach to Planning, the Joint Water and Environment Sector Support Programme, the Water Policy Committee, and the Sector Working Groups. At the sub-national level there are the District Water and Sanitation Coordination Committees, and Water User Committees also known as Water and Sanitation Committees. UWASNET leads the coordination for non-governmental and community-based organisations or groups.

Kabarole district has institutionalised platforms for learning and coordination of WASH stakeholders, notably the District Water and Sanitation Coordination Committee (DWSCC) and the Rwenzori Regional Learning Forum (RRLF). It also has informal task-oriented platforms such as the District Task Force on Universal Coverage of WASH services. Civil society organisations in Kabarole are well-coordinated and collaborate on joint implementation of WASH and integrated water resources management (IWRM) interventions.

The reflections, actions, and commitments undertaken from these various platforms are adopted in local strategies. For example, various approaches on community mobilisation, financing, and tariff management have been scaled up as a result of insights and shared learnings through these platforms. The district learning mechanisms are currently linked to the national level through the Ministry's Technical Support Unit 6 (TSU6) that is based in Kabarole and is the main champion of the RRLF.

IRC's 2017 baseline study of WASH systems at the national level and in Kabarole District assessed the capacity and sector frameworks for capturing feedback and lessons learnt, and for developing and improving the performance of other building blocks. The study found that these processes were not only fully active at the national level but were also well-developed in Kabarole. IRC contributed significantly to this success because of the backbone support it provided to facilitate dynamic stakeholder interactions within Kabarole and the western Uganda sub-region through the RRLF.

Learning and adaptation in practice

Bruno Basudde, the Kabarole District Civil Engineer in charge of water, was stunned by the research findings on WASH conditions that he and his colleagues were reviewing. His office collaborated with IRC to assess the state of WASH knowledge, practices, and facilities in the communities and health centres in Kabarole.

In a two-day workshop convened to scrutinise the results and glean lessons about the situation the study had revealed, it was evident that the district and its partners had their job cut out. Sanitation outcomes were poor as many communities and health centres did not meet basic standards. Yes, people had built latrines, but with no provision for water and soap so users could wash their hands after visiting. "When we demonstrated hand-washing, we found that 80% of the people didn't know how to wash hands properly, including health workers," says Basudde. "We assume that people know, yet they don't know."

Sam Tusiime, a Community Development Specialist with TSU6, was very familiar with the situation that Basudde was bemoaning. He had overseen learning activities and home improvement campaigns designed to mobilise households and trigger action through Community-Led Total Sanitation (CLTS). Yet, despite all these efforts, "Kabarole District doesn't have a single open defecation free community," says Tusiime. "If you ask the community members whether they've heard about any campaign on how to manage faeces and to keep them in a place that is safe, there isn't much being done." The WASH study was a turning point for the district and its partners – an opportunity to learn and to adapt in ways that spoke directly to the issues and challenges that the evidence uncovered. "Most problems come from mindsets and attitudes," says Basudde. "People do not understand why they should wash hands after going to the toilet. A lot of sensitisation is needed for our communities." Installing infrastructure or putting up systems was not going to affect the situation fundamentally if the beneficiaries were not sold on the need to change their attitudes and behaviour. For Basudde and his team, it quickly dawned that raising awareness, promoting understanding, and advocating for change in attitudes and behaviour were inseparable from the work of setting up and managing systems or operating and maintaining hardware. This lesson would soon be tested when the district and the Kabarole WASH Task Team, through IRC support, introduced the fetch-as-you-pay system. IRC adapted the system for Kabarole as a model for improving the delivery and sustainability of water services in general, and the functionality and management of community water points in particular.

The Kabarole Hand Pump Mechanics Association (KAHASA) was the technical custodian of the system at the three water points of Mukumbwe, Burungu, and Kanyamyegodi where it was piloted. The success of the pay-as-you-fetch model turned on the extent to which the user communities were motivated to embrace the model and the changes in service delivery culture it brought along. Although an independent assessment of the model conducted for IRC in 2018 generally found the performance below par and the uptake patchy, Basudde is convinced that on the whole: "People now understand the value of paying because they are able to maintain their facilities using their own revenue without having to come back to the district local government or the sub-county for funds." With pay-as-you-fetch, communities that have embraced the model can maintain and repair their boreholes without turning to the district for funding. The facilities operating under the system have also become reliable sources of business for the hand pump mechanics in the sub-counties where they are located. 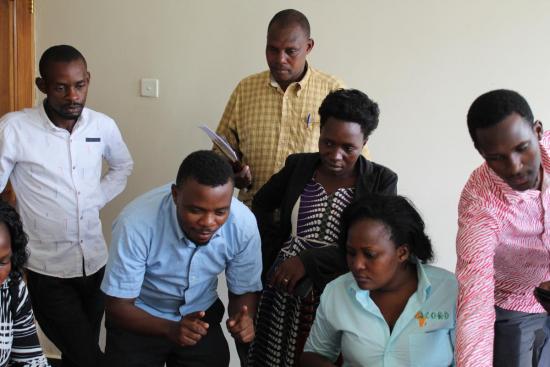 Applying lessons from the pay-as-you-fetch model

One of the key learning points for the district was that innovations like pay-as-you-fetch, and other mechanisms such as Water User Committees and Sub-county Water Supply and Sanitation Boards, demanded that the beneficiaries adapt to superior forms of organisation. The communities as well as the technical and political leadership also needed to learn and adapt to different organisational methods for more effective service delivery.

The district local government (DLG) is now intervening on multiple fronts to address the various bottlenecks that have undermined WASH standards. In addition to sensitisation intended to raise awareness, the DLG stepped up the enforcement of by-laws to raise the level of compliance with sanitation and hygiene standards and regulations.

While Basudde and his colleagues work to strengthen WASH service delivery at decentralised level, his central government counterparts are harnessing lessons beyond the district and adapting them to local conditions at the district level; and also applying regionally and nationally what they are learning in Kabarole.

Brian Guma, a Senior Water Officer in the Albert Water Management Zone under the Ministry of Water and Environment, works to bring regional and national perspectives to bear on the local context. He is also the Project Coordinator for Mpanga Catchment. The Albert Water Management Zone was created in 2011 based on the findings of the water resources reforms study of 2009. One of its core functions is to develop and implement catchment management plans and committees. The plans are stakeholder- and community-driven, and are developed following guidelines developed by the Ministry. The catchment management plans entail remedial measures and interventions drawn from the affected population's own ideas. This is to ensure ownership and accountability for what is being implemented. After the plans have been crafted, the next thing is to popularise them and build the communities' confidence in their long-term value.

"IRC's major strength has been in advocacy and we're riding on that strength, for example, popularising the catchment management plans and laws, letting the population and all stakeholders know that we have operational documents to guide the agreed interventions," says Guma. "Having informed citizens who know their rights pushes us to deliver better services as government."

Forming and working through the catchment management committees has generated useful learning for the Albert Water Management Zone and the District WASH Task Team. As Guma explains:

• Women are critical players because of their pivotal role in households. Some committees require that women make up at least 50% of the membership.
• Local populations are ignorant of laws and regulations that govern major water bodies.
• Sensitisation is critical to promote sustainable use of water resources. Demonstrating the benefits of mutual relationships between communities and the environment motivates people to conserve the ecosystem.

Catchment Management Committees have become part of the learning alliance. Through links with IRC's local partners such as JESE (Joint Efforts to Save the Environment) and Protos, the committees serve as platforms for the exchange of ideas and transfer of knowledge. These organisations have supported the government in building the capacities of these committees through training to monitor the implementation of the catchment plans under their supervision. For example, Orugendo Rwakaveera (The Journey of Polythene), a documentary that Protos produced, has been used as a training aid for the Mpanga Catchment Management Committee on the effects of environmental degradation. According to George Bwambale, the Protos Programme Officer in Fort Portal, the documentary came in handy for disseminating vital information and amplifying important messages about IWRM among members of the learning alliance. As a result, there is growing interest in IWRM within the WASH sector. Protos as chair of the IWRM thematic group of UWASNET has used this platform to bring the lessons it has learnt in Kabarole to the attention of national actors and organisations working on similar issues elsewhere in the country.

JESE partners with IRC on the Watershed programme in the areas of capacity building, research, and advocacy. Jude Twesige, JESE's project officer, says the knowledge generated from research is used to build the capacity of local civil society organisations to advocate for policy change towards the integration of WASH and water resources management.

Learning and adapting in the context of complex systems like those that deliver WASH services happen more effectively where there are supporting structures. Twice a year, TSU6 convenes sanitation and hygiene coordination committee meetings of all the 15 districts under its jurisdiction to deliberate on issues that concern the region and to share experiences and insights. Similarly, the RRLF meets annually and brings together WASH actors in the TSU6 districts to identify best operational practices and figure out how to replicate them across the region. It is in that spirit that IRC came up with a checklist for effective adoption and implementation of the pay-as-you-fetch model that provides guidance on how to replicate the system. The deliberations of the forum, which IRC supports, feed into the ministry's technical and joint sector reviews.

According to Opwanya: "The IRC approach is unique in the sense that it doesn't deal with actual hardware. Most of their work relies on system strengthening, ensuring that the way government delivers services is right. They are involved most of the time in advocacy and I think that is something we are proud of. For example they advocate for marginalised communities and allocation of finances to unserved areas. They are good at pointing out those areas where government is not doing well, and that is good for us. It's kind of providing checks and balances. IRC is also very strong in documentation and communication. That is something we have learnt as a ministry; simplifying engineering jargon for the benefit of the community. Other districts should be able to pick from that as well."