On World Toilet Day, I am sharing a positive story to inspire everyone. 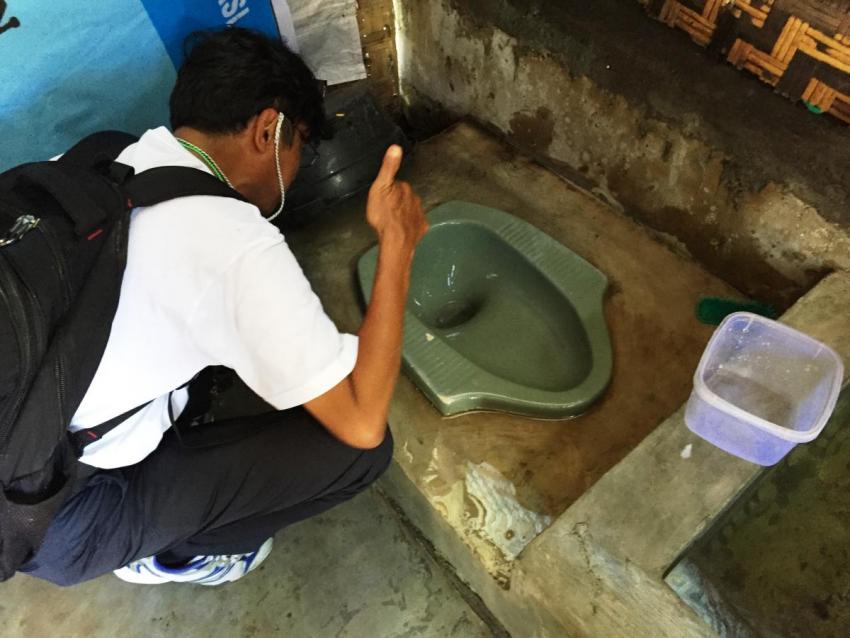 On 19 November, we are celebrating World Toilet Day and this year it is all about “leaving no one behind” and “inspiring action to tackle the global sanitation crisis and help achieve SDG 6”. Therefore, there cannot be a better moment to share a positive story meant to inspire everyone forever. It is a story about political will and commitment. A story in which political and public leaders have taken up an active role in improving sanitation and hygiene conditions in rural districts in East Indonesia. A story in which implementation partners have taken a step back and moved into a new role.

It all started in 2010, when a consortium of five Indonesian NGOs, Simavi and IRC came together to implement the Indonesian Government’s STBM policy (Sanitasi Total Berbasis Masyarakat or Community-Based Total Sanitation) in nine rural districts in East Indonesia. By the end of the programme in mid-2015, some 1.5 million people had benefited. An overwhelming success? I guess so if you look at the number of people that benefited from improved sanitation and hygiene services, but it depends of course on how you define success. Following the SDG 6.2 definition, you can only speak of a successful intervention if it leads to universal and sustainable access to adequate sanitation and hygiene services. Both universal and sustainable were somewhat questionable.

In 2016, the programme was extended with a new phase, partly to continue working in four of the previous nine districts and partly to start in three new districts. Based on the learnings of the first phase a new theory of change was developed which led to a completely new way of working. The consortium partners became responsible for systems strengthening, including capacity building of local actors, instead of STBM implementation. Consequently the role of the consortium partners (initiator and catalyst) as well as that of the district (enabler), sub-district (supporter) and village authorities (driver), changed completely. 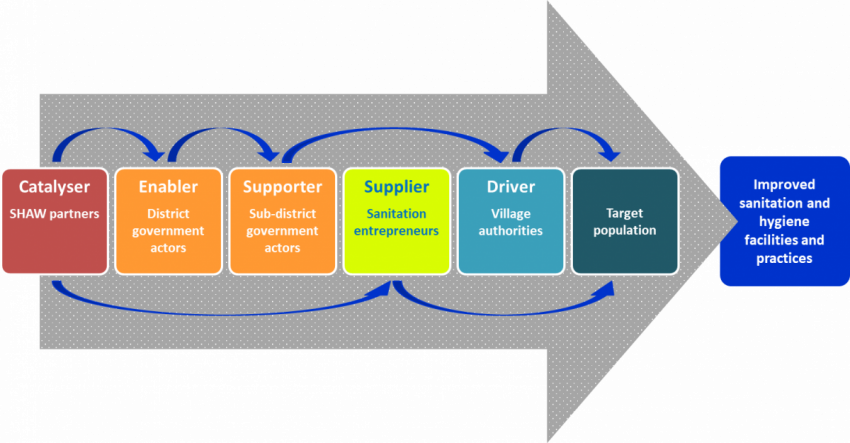 The programme's main actors and the capacity building process flow

On to the next phase

Because of the work done during the first phase, a pretty good idea had been formed on which system elements and capacities need to be in place to deliver and sustain sanitation and hygiene interventions. These vary from STBM being integrated in district and village level multi-annual plans and budgets, actual allocation of adequate resources to replicate and sustain STBM interventions throughout the district, capacity to carry out village level activities such as demand creation and hygiene promotion, capacity to support community-based monitoring and provide follow-up, and so on. These critical elements and capacities have been captured as capacity outcome indicators in the programme’s result monitoring framework and are now monitored every six months during the programme.

So how successful is this new phase? Are interventions taking place throughout the districts to realise universal access? NO! Are the interventions leading to sustained changes in sanitation and hygiene behaviour and practices? Too early to tell! Nevertheless, there are some promising developments. Budget allocations at district and village level have skyrocketed and therefore all village level activities are financed from local resources. On top of the villages targeted by the programme, the district authorities have taken the initiative to replicate the approach in additional ’replication’ villages. The table below shows in how many villages STBM interventions are currently taking place. Only the three new districts are considered here. On top of the 76 ‘programme’ villages, the district authorities have allocated additional human and financial resources to implement STBM in an additional 81 ‘replication’ villages.

Another way to measure success is to determine to what extent systems and capacities have improved since the start of the programme. The following graph shows the combined systems strengthening and capacity development scores for both the district and sub-district bodies responsible for the STBM interventions.

So are there any improvements?

In general, it can be said that performance has increased noticeably during the past three years. However, more important is the question whether the improvements in performance have resulted in any noticeable improvements in sanitation and hygiene conditions in the three districts. Three indicators that may provide some insight: 1) toilet ownership has increased modestly from 67% in mid-2016 to 76% by mid-2019; 2) on the other hand the proportion of improved toilets has increased from 46% to 69% over the same period; and 3) the proportion of houses with a handwashing facility located near the toilet increased from 62% to 89% over the same period.

Finally, the number of villages that have been declared 100% ODF and 100% STBM might provide another indication of the degree of success. The following table shows the relative success of the programme in the three new districts. The district of Dompu shows an extremely high declaration ratio of 77% to date. Lombok Utara is way behind but that is due to a destructive and shallow earthquake measuring Mw 6.9 that struck the island of Lombok on 5 August 2018. This has had a devastating effect on the district and the programme interventions and outcomes.

Enabling local actors to initiate and drive change is the (only) way forward and the promising experiences in East Indonesia shows that, within the right context and by applying the right approaches, it can be done.